No, not that one. Cats With Hats is a new full-color independent comic book series written and illustrated by Aynsley King from British Columbia. After a successful Kickstarter campaign, the first issue is out and available now in paper or digital form. “Five cats: Viva, Jinx, Olive, Purrche and Soots. They don’t remember who they are, or why they have hats that grant them the power to change into the animals with powers they wouldn’t have otherwise. Together, these strangers must work together using their new hat powers to piece together their shared mystery all while uncovering the conspiracies in Catsopolis…” That’s what the official web site says. Go check it out! 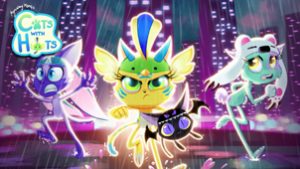