Huevocartoon is an animation studio from Mexico that made a name for itself with the Huevos series of animated films — which were quite profitable north and south of the border. Now they’re taking things in a different direction with their new CGI film Grimalkin. According to an article in Variety, “…the horror comedy narrates how a domestic cat’s love for his family is tested when mischievous creatures invade the house, a foster home run by a loving young couple. Being the only one with the ability to see them, the cat must confront the creatures before they take over the house and its inhabitants.” The film is being directed by storyboard artist Sant Arellano. There’s no word yet on a planned release date — but check under your bed just in case. 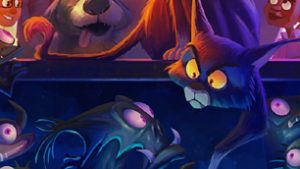