The Annie Award Nominations for 2017

Recently ASIFA-Hollywood announced the nominees for the 2017 Annie Awards — considered to be the Oscars of animation, and often predictors of other upcoming awards. 2017 was nowhere near as furry as 2016, but there are quite a few furry (and more generally anthropomorphic) items scattered throughout the nominees. Cars III is up for Best Feature, as well as Animated Effects. Despicable Me III is also nominated in those categories, as well as Character Design (everybody still loves the minions…). Big Bad Fox from Europe is nominated in the somewhat-new category of Best Independent Feature, as well as Character Animation and Best Directing. The “Special Production” category has several anthropomorphic nominees including the Imaginary Friend Society series, Olaf’s Frozen Adventure (also nominated for Animated Effects and Music) and Pig: The Dam Keeper Poems. Though they’re not up for Best Feature, Ferdinand and The Star are both up for Best Editing, plus Production Design (Ferdinand) and Storyboarding (The Star). The furriest Short Subject nominee is the stop motion film Hedgehog’s Home — unfortunately, in spite of its title, Son of Jaguar is not a furry thing at all. It’s interesting that the entire Animation In A Live Action Feature category is all entries with anthropomorphic interest: Game of Thrones, Guardians of the Galaxy Volume 2, Kong: Skull Island, Valerean and the City of a Thousand Planets, and War for the Planet of the Apes. Likewise you’ll find a lot of anthropomorphic interest in the Best TV Series for Pre-School Children (Mickey and the Roadster Racers, Octonauts, Peg + Cat, The Stinky & Dirty Show, and Through The Woods) and Best TV Series for Children categories (Buddy Thunderstruck, Lost in Oz, Niko and the Sword of Light, Tangled the Series, and We Bare Bears). Buddy Thunderstruck is also up for Character Design, as is Danger & Eggs and Trollhunters. Of course Trollhunters is making a good show on its own, with nominations for Direction, Storyboarding, and Writing. Over in the Best TV Series for Adults the furriest thing is Bojack Horseman, which is also nominated for Voice Acting and Editing. The Disney Mickey Mouse series is quite popular, as shown by the nominations for Direction, Music, Production Design, Storyboarding, Voice Acting, and Writing! Finally, several shows we know and like are nominated in one category each, including Dragons: Race to the Edge (Best Direction), Tumble Leaf (Best Music), Pickle & Peanut (Best Editing), Amazing World of Gumball (Best Voice Acting), and Dinotrux (Best Editing). Whew!  Got all that? The Annie Awards will be handed out at a gala ceremony on Saturday, February 3rd, 2018 at UCLA. 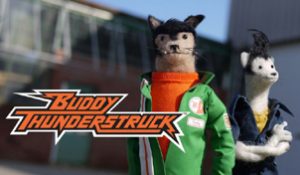