April Solomon is a second generation artist (her father, David Solomon, has had paintings displayed in the Smithsonian Institution) who specializes in fantasy works and fantasy creatures. In her case though, it’s fantasy creatures informed by a well-researched reality. According to her web site, “Studying both animal and human anatomy is a constant perseverance to help design a more believable fictional creature. Her inspiration and reference comes in all forms; such as bones and muscle tissue, colorful birds, ambient fish, flowering plantlife, skin tearing sharp toothed animals, and anything else that may find its way into her field of vision that well spark the glow of inspiration.” To that end, she sketches and paints plenty of real-life animals as well. 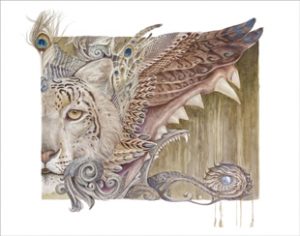