Before He Stormed Heaven

Grace Kum is a visual development artist and illustrator whom we met at the CTN Animation Expo. Recently she’s worked on Disney TV’s Big Hero 6 series, and various series for Dreamworks TV too. We’re spotlighting her because in her free time she’s been working with Dahyeu Celine Kim on a project called Higher Than The Sky, which they describe as “a prequel to Journey To The West” — which is, of course, the most famous story of the legendary Monkey King. According to Grace’s web site, this project is ready to get up and running again. 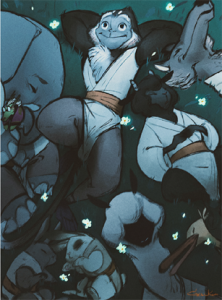