Pete Oswald is a very busy production designer and illustrator. Recently he and his team were responsible for lighting and set design on The Angry Birds Movie. And from his web site: “As a character designer and concept artist, Pete has helped to uplift many of the most successful animated franchises. Among other projects, Pete has worked on Madagascar: Escape 2 Africa, Cloudy with a Chance of Meatballs 1 & 2; Hotel Transylvania; and the Oscar® nominated ParaNorman, for which he earned an Annie Award nomination.” Even with all that going on, Mr. Oswald finds the time to illustrate books for children as well.  Recently he completed one called Mingo the Flamingo (written by Justin K. Thompson and published by Harper Collins). “A hilarious picture book about a flamingo named Mingo who is ready to fly but gets lost from the rest of the flock during a terrible storm. To make matters worse, when he crashes, he completely forgets who he is and where he belongs. With the help and training from some new friends, he must find the strength to make it back home and reunite with his family.” Pete also worked with writers Laura Lyn DeSiena and Hannah Eliot to create a series of “Did You Know?” books — Hippos Can’t Swim and Other Fun Facts being one of them. Also available at his web site. 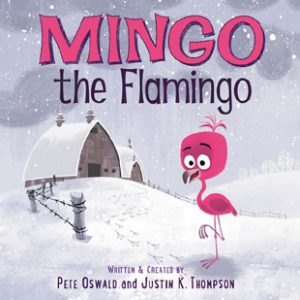