So Who Gets To Be The Pretty Lady…?

And the great comic book crossover festival continues: Kong on the Planet of the Apes.  What more can we say?  Well this is how Boom! Studios has it: “Following the events of the first Planet of the Apes film (1968), Dr. Zaius and General Ursus lead a small group of soldiers to the Forbidden Zone to destroy any remaining evidence of Taylor’s time among them. To their surprise, they discover… A Kong! Now they must venture to Skull Island with Cornelius and Zira to discover the truth, but they may not survive the deadliest journey of their lives!” Written by Ryan Ferrier and illustrated by Carlos Magno (with a cover by Mike Huddleston), this 6-issue full-color mini-series just hit the shelves this month. Empire Online has an interview with Mr. Ferrier about the whole thing. 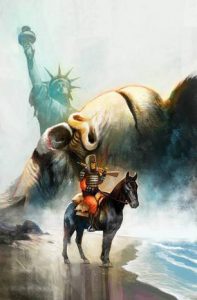