The Wolf Caught Their Eye

Thanks to Animation World Network we found out about Manivald, a new animated short film by Estonian director Chintis Lundgren. It’s been making quite a stir at international animation festivals. Here’s what they say: “Manivald, in the same vein of Lundgren’s previous work, is both absurdist drama and social satire. The eponymous fox, an academic drowning in various degrees, is unemployed and depends on his controlling mother for his livelihood. Manivald is a character the young and educated may find all too relate-able. The tense mother-son relationship is pushed to a breaking point when both Manivald and his mother fall for handyman Toomas, a handsome wolf with pecs and abs to spare. The ensuing conflict is the final nudge Manivald needs to leave home and start a life of his own.” Next up is a presentation at the Sundance Film Festival. 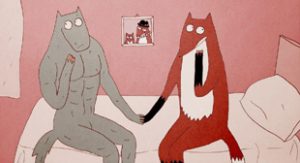