Sometimes you just gotta admit when other people say it better. This is direct from Comics Alliance: “Over the past few years Zac Gorman has made a name for himself paying tribute to his favorite video games with his comic Magical Game Time. This October the cartoonist will be spreading that same magic into his first graphic novel, Costume Quest: Invasion of the Candy Snatchers, a companion narrative to Double Fine’s 2010 Costume Quest RPG. While Costume Quest followed a human kid and their friends as they battled candy-stealing monsters called Grubbins to recover their kidnapped sibling from another dimension, Invasion of the Candy Snatchers will flip the script and see what the non-evil Grubbin Klem got up to that Halloween.” What he got up to, it seems, is joining up with some of his fellow young Grubbins to sneak into the human world and try and steal candy — for their own sugar-starved world. Costume Quest: Invasion of the Candy Snatchers is out now in trade paperback from Oni Press. 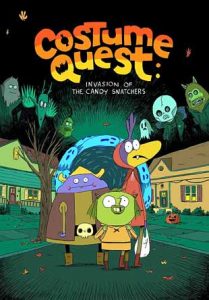