Okay, so how about this: A fur-suit maker who also creates a great deal of 2D art. Or, is that the other way ’round? We don’t know! But the artist known as Tsebresos has plenty of both to show. According to her web site she’s taking a year off from fur-suit making, but she has plenty of art she’s going to be working on — and plenty of furry fan conventions where she plans on putting in an appearance in the Dealers’ Den. Look her up! 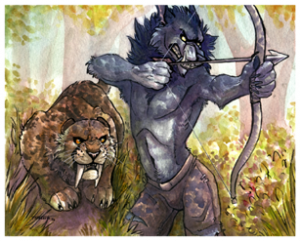