Funny Animals Around The World — Except Here

And here we go again… Another cool animated funny animal series that has picked distribution around the world but somehow skipped North America… well, at least not the US of A. Here’s what Animation World Network has to say about Animanimals: “Each of the 26 non-dialogue episodes features a different animal facing an absurd adventure with a surprise ending. The series has already won 20 prizes across the world, including the Audience Award at the New York Children’s Film Festival for two consecutive years — for the films Zebra and Octopus — and the award for the Best Film for Young Children at the Chicago Children’s Film Festival for Zebra… The family entertainment series Animanimals is produced by highly experienced and creatively driven Studio Film Bilder in Stuttgart, which also has garnered many awards over its 28-year history… “All stories are driven by director Julia Ocker’s engaging sense of humor,” says Thomas Meyer-Hermann, founder of Studio Film Bilder. “There is laughter and empathy throughout the story, and then excitement at the clever and creative solution.“” Now it’s ready to be shown in much of Europe, the Middle East, North Africa, New Zealand, and Canada. We’ll let you know if it gets closer to us here! 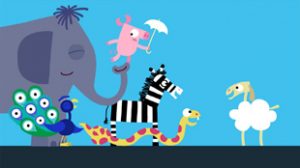