She Makes A Big Splash

Benson Shum is an illustrator and animation artist at Walt Disney Feature Animation. (He worked on Moana, Zootopia, Big Hero 6, and other films.) As part of their Artist Showcase series, Disney-Hyperion published his illustrated children’s book, Holly’s Day at the Pool, which is available on Amazon. “Holly the hippo imagines the worst: Icebergs and icy water, penguins and seals! Her imagination bursts at every turn, making it harder and harder for her to step foot in the pool… Until she get the chance to be a hero. Holly may be scared, but she is a very brave girl.” Now on his web site Mr. Shum announced that he will be illustrating a new book, Go To Sheep, written by Jennifer Sattler. That one’s set to be published by Little Simon later this spring. 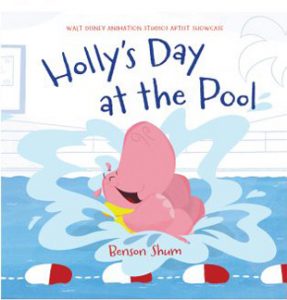