The Lost Rainforest is a new fantasy novel series for young readers, written by Eliot Schrefer (author of the Spirit Animals book series). The first book in the series is called Mez’s Magic — and here’s what the publisher, Harper Collins, says it’s about: “Caldera has forever been divided into those animals who walk by night and those who walk by day. Nightwalker panthers, like young Mez and her beloved sister, have always feared daywalkers as creatures of myth and legend. Until the eclipse. Now Mez has discovered that she can cross the Veil and enter the daylight world. Her magical power has unknown depths, but she must rush to discover it after a mysterious stranger arrives at her family’s den, bearing warnings of a reawakened evil. Saving Caldera means Mez must leave her sister behind and unite an unlikely group of animal friends to unravel an ancient mystery and protect their rainforest home.” With interior illustrations by Emilia Dziubak, The Lost Rainforest: Mez’s Magic is available now in hardcover. 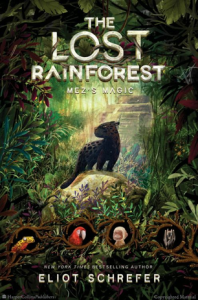