Saturday the 3rd at UCLA, the International Animated Film Society (ASIFA) handed out the annual Annie Awards for the best in animated films, television, and effects for the year 2017. As everyone expected, the big winner of the evening was Disney/Pixar’s Coco, which took home 11 of the 13 honors that it was nominated for, including Best Feature, Best Directing, and Best Writing. (Not really an anthropomorphic film, but those alebrijes were so cool!) In spite of Coco’s sweep, there was still room for several anthropomorphic items to win awards in several categories. Revolting Rhymes was awarded Best Special Production (the award for medium-length original films). Based on the poems of Roald Dahl, Revolting Rhymes was created by Magic Light Pictures, which previously brought us The Gruffalo and Highway Rat. Silvergate Media’s series The Octonauts won for Best TV Production for Preschool Children, while We Bare Bears won Best TV Production for Children. Trollhunters won for Best Character Animation in a TV Production, and the feature War for the Planet of the Apes won for Character Animation in a Live Action Production. Cuphead took home the award for Best Game. Meanwhile, the Disney Mickey Mouse TV series had quite a night, taking home Annies for Best Directing, Best Music, and Best Storyboarding. Visit the Annie Awards web site to see the full list. [And remember: The Ursa Major Awards are taking nominations now!] 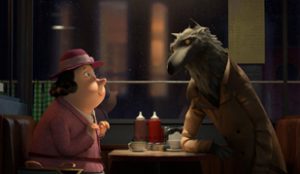