IDW Publishing have two new feline-themed games they recently released. Roar: King of the Pride is a board game for older kids and teens. It goes like this: “In the wilds of Africa, lion prides rule over all beasts, but only one pride can rule over all the lions! In Roar: King of the Pride, three to six players compete to become the dominant pride of Africa. Managing your food supply, while expanding your territory and growing your pride size with cubs, will take strategic planning and key wits. Even the best-laid plans, however, can be interrupted by other prides’ secret objectives, or worse…the encroachment of a new, and deadly, threat.” Meanwhile for younger kids (or folks who like smaller kitties!) there’s a new card game: “In Slap Cat!, you play as a mad scientist attempting to assemble the world’s most adorable cat! Draft cards to your Cat Construction area by quickly slapping them as they are revealed. Earn bonus points for kitty fedoras, bows, balls of yarn and more. But be careful, slap too slow and you could be left with a hand full of fish bones!” Got all that? 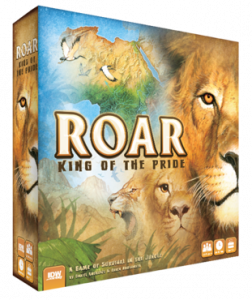