Here’s a European animated film from last year that we missed somehow: Rabbit School — Guardians of the Golden Egg. According to an article at Animation magazine’s site from last March, “Following its world premiere at the Berlin Film Festival, family animated feature Rabbit School – Guardians of the Golden Egg has had a strong debut in cinemas… Directed by Ute von Münchow‐Pohl, Rabbit School centers on a young urban rabbit named Max who gets stuck in an old-fashioned Easter Rabbit school when it is surrounded by a clan of clever foxes who want to take over the holiday. With the help of cute bunny Emmy and the instruction of the mysterious Madame Hermione, Max learns not only the secret magic of Easter bunnies, but also where he truly belongs.” As you can see from the trailer, the film was dubbed with a British cast for distribution in the UK. No word yet if anyone plans to release it on DVD for North America. 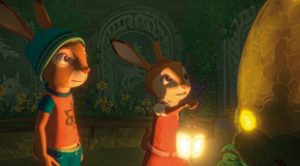