Beware of Bunnies with Sharp Things

We found this in a recent Previews magalog: Stabbity Bunny, written by Richard Rivera, illustrated by Dwayne Biddix, and published by Scout Comics. “Seven-year-old Grace, still clutching her adorable plush bunny, is kidnapped by supernatural forces that have been hunting her family for generations. She awakens in a shack on the outskirts of town, and for the first time in her life, the little girl can’t sense her mother’s presence. Her captor knows the family’s secrets, and that link has been severed. When her escape attempt fails, it seems there will be deadly consequences, but an unlikely protector intervenes. It’s a big mistake to kidnap a child with a plush toy named Stabbity Bunny!” Oh you just know someone is working on a movie adaptation of this, don’t you? 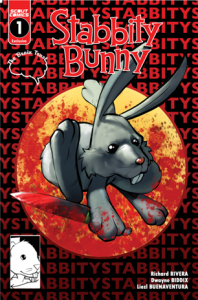