Disney Channel is bringing back a childhood memory for many, and perhaps creating new memories for a new generation. This March they will premier a new Muppet Babies TV series as part of their Disney Junior line-up. (If you didn’t know, back in the 1990’s the original Muppet Babies 2D animated series was so successful that it spawned a flood of imitators, including Disney Babies and Warner Brother Babies, no less.) Interestingly, this will be the first Muppet TV series animated in CGI. (Also interesting: Jenny Slate (Dawn Bellwether from Zootopia) is one of the voice actors.) According to Animation Scoop: “Based on the original Emmy Award-winning series, the all-new CG-animated Muppet Babies chronicles the hilarious playroom antics of the young Kermit the Frog, Piggy, Fozzie Bear, Gonzo, Animal and brand-new Muppet Baby, Summer Penguin. The series will feature guest appearances by fan-favorite Muppets including: Statler and Waldorf, Bunsen and Beaker, Rowlf the Dog, Rizzo, and Dr. Teeth. Set in the vibrant playroom of an urban brownstone with an expansive backyard, the Muppet Babies have everything they need at their fingertips to lead them on their fantastical adventures.” The article has a lot more information, and a preview clip as well. Look for the new series to debut March 23rd. 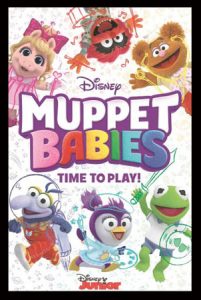