Teenage Girls and Their Friends

Over at Cartoon Brew there’s an article about two new animated TV series coming to The Disney Channel in 2019. They have some interesting things in common: Both feature teenage human females transported to an unearthly other realm, and both have been created by storyboard artists who worked on the wildly-popular series Gravity Falls. One is a bit anthro, and one is very anthro! The former would be Owl House, created by Dana Terrace. “The show follows Luz, a self-assured teenager who accidentally enters a portal to the Demon Realm where she befriends a rebellious witch, Eda, and a tiny warrrior, King. Though she lacks any magical abilities, Luz pursues her dream of becoming a witch by apprenticing with Eda, and ultimately finds a new family in an unlikely setting.” On the other paw (flipper?) there’s Amphibia, from Matt Braly. “The show tells the story of Anne Boonchuy, a self-centered teenager who is magically transported to the world of Amphibia, a rural marshland populated by frog-people. There she meets a young frog named Sprig, who will become Anne’s first true friend and help transform her into a hero.” Keep your ear-holes open for some more precise debut dates when we get them. 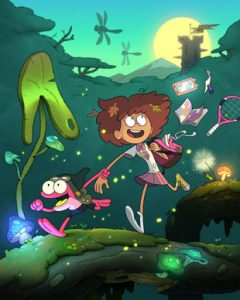