As you may recall, last year we noted that Marvel Comics had collected together several previous adventures of the furry fans’ favorite Inhuman, Lockjaw the teleporting dog. Well it looks as if that collection must have done rather well, because now Lockjaw has been granted his own full-color 4-issue miniseries. Marvel puts it like this: “Lockjaw spends most of his time defending the Inhuman empire alongside Black Bolt and Medusa. But when he gets a message that his long-lost litter mates are in danger, he’ll spring into action to save them! But wait – Lockjaw has brothers and sisters? Can they teleport? Are they Inhuman? Can they possibly be as gosh-darned cute as their big brother?” Written by Daniel Kibblesmith (The Late Show) and illustrated by Carlos Villa, the first issue of Lockjaw hits the shelves this week. Find out more over at Comicosity. 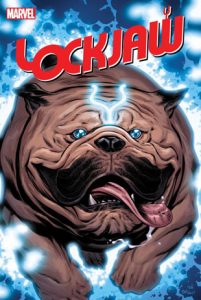