Ethan Young is an artist and comic-creator who has made a name for himself at Dark Horse Press with titles like Nanjing: The Burning City and The Battles of Bridget Lee. Before all that though, there was his semi-autobiographical comic Tails, based on his time working at an animal shelter — while trying to kick-start his comic career. Now Dark Horse have brought it all together in a new collection, Life Between Panels: The Complete Tails Omnibus. “Ethan’s life as one of the many cartoonists living in NYC might look mundane at first glance—living with his parents, working a day job, playing with cats. But things get crazy when he starts to draw his comic strip Crusader Cat! Soon, Ethan can’t tell the difference between real life and the comic panel!” Look for it in trade paperback this April. 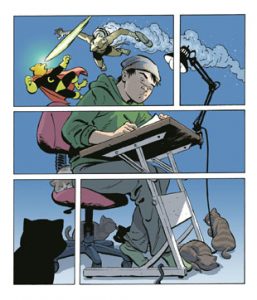