Before He Danced the Magic Dance

Boom! Studios (through their Archaia imprint) are returning to the world of Jim Henson’s Labyrinth in a new series called Labyrinth: Coronation. It sounds like this: “Before Sarah braved the Labyrinth to save her brother, another young woman sought to save a young boy named Jareth from the clutches of the Goblins. Set in 18th-century Venice, Italy, Jim Henson’s Labyrinth is a striking look into the history of the Labyrinth itself, and what happens to the little boys who don’t get rescued. This is the untold history of the Goblin King.” Written by Simon Spurrier and illustrated by Daniel Bayliss, the first issue is on the shelves now. Mr. Bayliss, you may recall, was the illustrator of that marvelously weird anthropomorphic comic Kennel Block Blues. 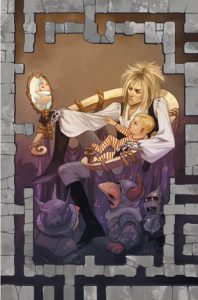