Your humble ed-otter remembers reading Robert Silverberg’s science fiction novel Downward to the Earth in his youth. (It was one of the books mentioned in Barlowe’s Guide to Extraterrestrials.) Now, Humanoids (and Laura Zuccheri) have adapted the book into a new full-color hardcover graphic novel, illustrated by Philippe Thirault. “Ex-lieutenant Eddie Gundersen returns to Belzagor, where he had left behind his youthful illusions, the love of his life and his shameful past as a colonizer. He finds the planet returned to its two intelligent species: The Nildoror and the Sulidoror. Taking the lead on a scientific expedition to the borders of the indigenous lands, Gundersen must face his own demons and settle the score with a planet which still has hidden secrets.” The Nildoror resemble mastodons, while the Sulidoror resemble giant sloth bears. Lt. Gundersen has his work cut out for him, trying to navigate between these two very different cultures. Doom Rocket has a detailed preview of the new graphic novel. 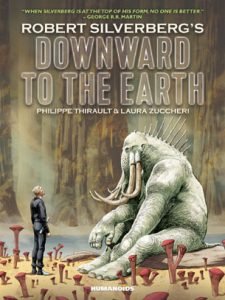