But the Cat Came Back

Screen Daily has an article about 10 Lives, a new CGI feature film created by some familiar names. “The film is the second to be produced as part of a joint venture between Chinese animation outfit Original Force and GFM Animation. The first, Duck Duck Goose, will be distributed in China by Wanda Pictures and in the UK by Entertainment Film Distributors… 10 Lives is produced by Penney Finkelman Cox (Shrek) and Adam Zhang, senior vice president of Original Force. The story follows a once scrawny shelter kitten that now leads a pampered life after being adopted. Everything changes when he loses his ninth life. In the afterlife, he escapes and cheats his way into another cycle of nine lives, but he doesn’t realise that each of the nine lives will see him return as a different animal.” As you can see from the article, the film has already set up distribution throughout much of the world — but no word yet about North America. You can just bet, though, that a US or Canada deal is going to hinge on how well Duck Duck Goose does at the box office later this year. 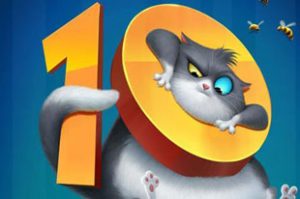