They Say Stories Can Be Dangerous

Check out this bio: “Matt Laney is an ordained minister with a lifelong interest in world religion, wisdom traditions, martial arts, big cats and middle grade literature”. That might explain the spiritual slant behind Reverend Laney’s first fantasy series for young readers, Pride Wars. The first book, The Spinner Prince, is out now in hardcover from Houghton Mifflin Harcourt. “In the scientific realm of Singara, where feline humanoids rule, fiction is forbidden. Those caught telling stories lose their tongues before being exiled. Heir to the throne, thirteen-year-old Prince Leo, is cursed with the “fiction affliction,” the unpredictable, uncontrollable habit of telling stories. Worse, the stories carry a dangerous power, leaving creatures behind who cause trouble and threaten to expose Leo’s affliction. Meanwhile, Leo’s elder cousin is making his move to seize the throne and the enemy beyond the Great Wall, another feline race called Maguar, are rising up. Will Leo claim the throne from his rival (and keep his tongue) before his curse is revealed? Or will he embrace his ability as a gift and discover a far greater destiny among the Maguar?” Check it out over at Kirkus Reviews. 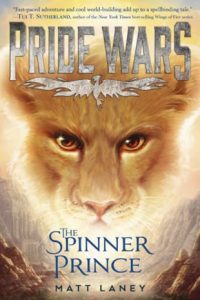