Newberry Award-winning author Linda Sue Park has a new fantasy series out as well called Wing & Claw. From Amazon, here’s the description of the first book, The Forest of Wonders: “Raffa Santana has always loved the mysterious Forest of Wonders. For a gifted young apothecary like him, every leaf could unleash a kind of magic. When an injured bat crashes into his life, Raffa invents a cure from a rare crimson vine that he finds deep in the Forest. His remedy saves the animal but also transforms it into something much more than an ordinary bat, with far-reaching consequences. Raffa’s experiments lead him away from home to the forbidding city of Gilden, where troubling discoveries make him question whether exciting botanical inventions—including his own—might actually threaten the very creatures of the Forest he wants to protect.” Raffa names that bat Echo, and the two of them — along with other animals of the magical wood — are the main focus of this series for young readers. 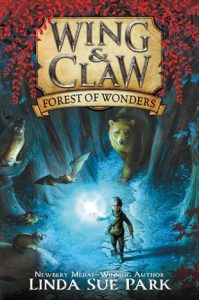