According to an article at Animation Scoop, we (or at least Amazon Prime Video subscribers) have not one but two new TV series from Dreamworks Animation to look forward to. First off are the brand new 2D adventures of none other than Rocky and Bullwinkle, set to premier this May. “The world-famous talking moose and flying squirrel are back in The Adventures of Rocky and Bullwinkle, a serialized comedy about two goofball best friends who routinely find themselves thrust into harrowing situations but end up saving the day time and again… The series is executive produced by Scott Fellows (The Fairly OddParents, Big Time Rush) and Tiffany Ward, daughter of the original series producer Jay Ward, and features Tara Strong (The Powerpuff Girls, Teen Titans Go!) as the voice of Rocket J. Squirrel, Brad Norman (America’s Most Haunted) as Bullwinkle J. Moose, Ben Diskin (Hey Arnold!) as Boris Badenov, Rachel Butera (Teenage Mutant Ninja Turtles) as Natasha Fatale, Piotr Michael (Impress Me, MADtv) as Fearless Leader, and Daran Norris (The Fairly OddParents) as the Narrator.” Then, there’s a brand new TV series based on the Kung Fu Panda movies. “Later in 2018, Prime Video will premiere Kung Fu Panda: The Paws of Destiny, an epic adventure series from Emmy Award-winning executive producers Mitch Watson and Elliott Owen (All Hail King Julien), and Lane Lueras (The Adventures of Puss in Boots). When four panda kids stumble upon a mystical cave beneath Panda Village, accidentally absorbing the chi of ancient and powerful kung fu warriors known as the Four Constellations, they must realize a destiny to save the world from an evil force. Meanwhile, Po finds himself faced with his biggest challenge yet — teaching this ragtag band of kids how to wield their newfound powers.” Much to keep your eyes out for! No previews for Paws of Destiny yet, but the article has a preview video of Rocky and Bullwinkle. 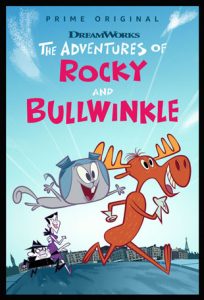