Paramount Has A New Monster

Over at The Wrap they’re talking about three new animated features that Paramount Pictures have announced for their upcoming film line-up. One in particular should be of note to furry fans — especially since we’ve talked about the source material before. Monster on the Hill is a film adaptation of the graphic novel by Rob Harrell. Paramount’s description goes like this: “In a world where monsters are tame and monster wrestling is a popular sport, teenage Winnie seeks to follow in her father’s footsteps as a manager by turning an inexperienced monster into a contender.” That’s a little bit different than the original storyline, so we’ll see how it goes. This we got from Cartoon Brew: “Monster on the Hill will be helmed by Bradley Raymond, a veteran director of direct-to-video Disney fare (The Hunchback of Notre Dame II, The Lion King 1-1/2, Tinker Bell and the Great Fairy Rescue) from a screenplay by Matt Lieberman (upcoming The Addams Family, Dr. Dolittle: Tail to the Chief) and Etan Cohen (Men in Black 3, Tropic Thunder, Madagascar: Escape 2 Africa). Monster on the Hill will be produced by ReelFX (Free Birds), which first announced it was developing the project back in 2015, and Walden Media.” Look for it in 2020. 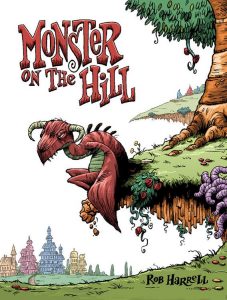