Wish for a Dragon

We found this article over at Variety: “Production is now under way on Wish Dragon, a major animated feature being made in China for Sony’s Columbia Pictures Film Production. The film is a first feature for Base Animation, the new animation studio that is part of Beijing-based VFX firm BaseFX, and for Chinese super star Jackie Chan. Chan’s Sparkle Roll Media is a producer and co-investor, and Chan will voice characters in both the Chinese- and English-language versions of the finished picture. The family-oriented film is being directed by Chris Appelhans (illustrator on Coraline) from his own original screenplay. The modern-day fairy tale picks up the moral challenges that emerge from the encounter between a boy and a dragon who is able to make wishes come true… The U.S. voice cast includes Fresh off the Boat star Constance Wu, Natasha Liu Bordizzo, Jimmy Wong, and Bobby Lee, alongside Chan.” Base Animation is hoping to have the film ready for release in 2019. 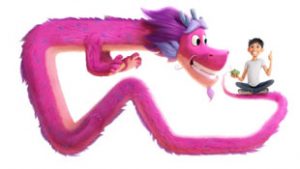