Nick & Judy, Back in the Day

Many thanks to our friend KeiFox for pointing this one out to us. Here’s what we learned over at the Hollywood Reporter: “Fans of Disney’s animated 2016 hit Zootopia should prepare for a return to the animal metropolis this summer, with Dark Horse Comics releasing a brand-new graphic novel based on the movie as part of its new deal with Disney. Aimed at younger readers, Disney Zootopia: Friends to the Rescue will feature two stories spotlighting young versions of both Judy Hopps and Nick Wilde and taking place before the events of the movie. Judy has to save the day — and her friend Dinah — at the Bunnyburrow County Fair, while Nick has to put his (questionable) talents to good use to give his friend Hedy the best birthday party imaginable. Both stories are written by Jimmy Gownley, with art by Leandro Ricardo da Silva, colors by Wes Dzioba, and lettering from Chris Dickey. The 48-page title will also feature special features and story-related activities.” Look for it on September 12th. 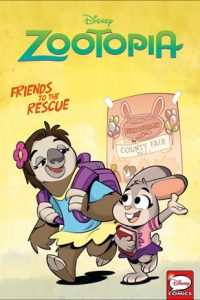