And more from AWN. (They’ve had lots of good stuff lately!) “Game of Thrones author and producer George R.R. Martin is bringing his fantasy game to animation, with Warner Animation Group set to adapt his 1980 children’s book The Ice Dragon into a feature. Though dealing with dragons, the book and the feature have no connection to either the A Song of Fire and Ice novels or the Game of Thrones TV series. According to Deadline, which reported the news first, the book tells the tale of a young girl who befriends a rare ice dragon, whose help proves decisive when an army of dragons invades her city.” No word yet on who’s directing or when it might be released. 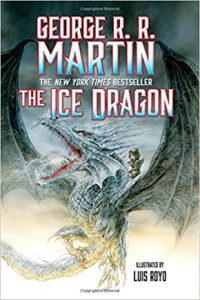