Submitted for Your Approval: A Planet of Apes

Bit of trivia you might not be aware of: In the late 1960’s Rod Serling (creator of The Twilight Zone) was the first person picked to adapt a screenplay from Pierre Boulle’s science fiction novel Planet of the Apes. Which he did — unfortunately his version (closer to Boulle’s book, featuring apes in a modern high-tech world) was considered un-filmable at the time, and a new adaptation by Michael Wilson was used instead for the famous 1968 film starring Charlton Heston. Well now, Boom! Studios have created Planet of the Apes: Visionaries, a new full-color graphic novel of Serling’s original script. Put into comic book form by Dana Gould and illustrated by Chad Lewis, it arrives in stores this August. Previews has an interview with the Boom! Studios folk all about it. 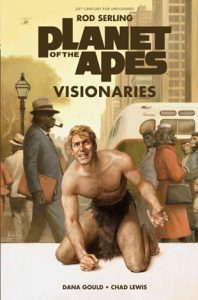