It’s Dangerous for a Pig to Dream

Here’s another one that Previews alerted us to: Unnatural is a hit full-color comic series in Italy, and now Image Comics is about to unleash it on North America. “Leslie is a simple pig girl. She loves sushi, she’s stuck with a job she hates, and she lives under a brutal totalitarian government – one that punishes transgressors for anything deemed ‘unnatural’. Leslie dreams of something different for herself. But those dreams are becoming dangerous…” Interestingly, writer and artist Mirka Andolfo says that none other than Omaha the Cat Dancer (by the great Reed Waller and the late Kate Worley) served as an inspiration for this series. Look for it soon in stores. 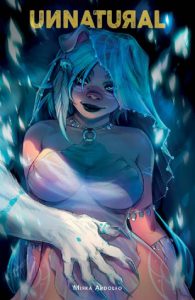