Interlude Press is a boutique publisher specializing in fiction geared toward the LGBT crowd and their friends and allies. While visiting their booth at the LA Times Festival of Books we came across the works of Michelle Osgood.  Her talent is dark supernatural fantasies with more than a touch of romance — and her favorite subject seems to be werewolves. Here’s the press release for The Better To Kiss You With, the first book in her series of the same name: “In the rare moments when Deanna Scott isn’t working as the moderator for Wolf’s Run, an online werewolf role-playing game, she wanders the local forest trails with her golden retriever, Arthur, and daydreams about Jaime, the attractive, enigmatic woman who lives upstairs. As Wolf Run’s “den mother,” Deanna is accustomed to petty online drama. But when threats from an antagonistic player escalate, Deanna wonders if her awesome online job could be riskier than she’d ever imagined — and if her new girlfriend knows more about this community than she had realized.”  The next two books in the series are Huntsmen and Moon Illusion. 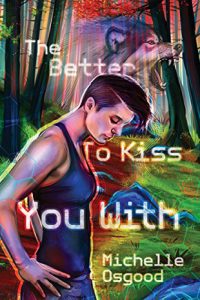