Well look what showed up in our news-feed… Animation magazine talking about a new series for young viewers. “Upcoming Netflix Original animated series Treehouse Detectives is ready to introduce itself to worldwide viewers this year. The preschool series will debut June 8 in over 190 countries/territories… Treehouse Detectives is created by Seoul-based animation studio Enpop and co-produced with Saban Brands… Aimed at children ages 3-6, the series follows brother and sister detective team Toby and Teri as they ‘use the clues’ and ‘follow the facts’ to solve everything from backyard mysteries to the bigger puzzles of the natural world.” Looks like another season is already in the works, too. 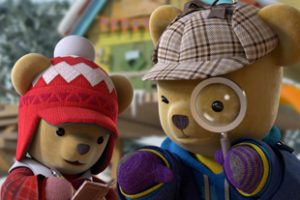