Start Your Kids on a Fantasy Adventure

And speaking of the young folks… We came across this at a book store. (Remember those?) The Last Firehawk is a new illustrated fantasy series for beginning readers, written by Katrina Charman and illustrated by Jeremy Norton. Here’s what they say about the first book, The Ember Stone, over at Scholastic: “A terrible darkness is spreading across Perodia. Thorn, a powerful vulture, is using dark magic (and his dark army of spies!) to destroy the magical land. A young owl named Tag may be the only one who can save it! Tag dreams of one day becoming a brave warrior, but he is small . . . In this first book, Tag and his best friend — a squirrel named Skyla — meet the last firehawk. Together, the three friends learn about a magical stone. Could this stone be powerful enough to defeat Thorn? This action-packed series makes a great introduction to fantasy and quest stories for newly independent readers. Realistic black-and-white artwork appears on every page!” Already there are four books available in the series. 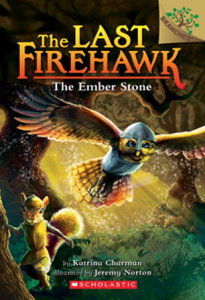