More new and interesting stuff coming out of China. (By the way, did you miss Duck Duck Goose back in April? So did we.) Animation World Network has an article about the latest animated feature from Light Chaser Animation (home of the critically-acclaimed Little Door Gods). The new film is called Cats & Peachtopia, and once again it was written and directed by company founder Gary Wang. It goes like this:  “Cats & Peachtopia tells the story of father and son cats, Blanket and Cape, living a carefree life in a tower block in the southwestern Chinese megacity of Chongqing. Curious about the outside world and longing for his deceased mother, Cape sets off in search of the cat heaven Peachtopia. Blanket goes after his son and adventures ensue.” The article goes into more detail, as well as discussing the financial difficulties faced by an animation company that produces films primarily (though not exclusively) for the Chinese market. No word yet if Cats & Peachtopia will reach North America anytime soon (DVD or otherwise), but the film did show at this year’s Annecy animation festival. 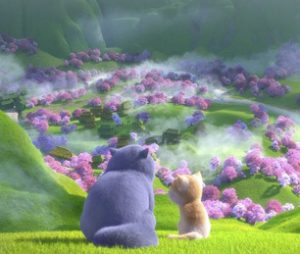