Close Encounters of the Furred Kind

We know, we know… Another item of interest at Animation World Network: It seems that Animal Planet will soon premier a new series with the rather straightforward title of Celebrity Animal Encounters. The premise is simple: Various celebrities sit down and talk about various encounters with various non-human animals, domesticated and otherwise… and their stories are then illustrated in a variety of mad animation styles. “Celebrity Animal Encounters began as a short-form digital series on Facebook Watch that drew in nearly four million views over the course of its four-episode run. It is being produced by Asylum Entertainment with the animation provided by Octopie Studios.” The new series starts up later this month, but you can check out the preview video now. 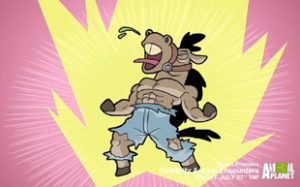