Too Much For Your Local Comic Shop?

Possibly the strangest “all ages” comic book you’ll find this year. Maybe we should let the publisher, American Mythology, explain The Filbert Factor: “It’s the kids’ comic that you don’t have to be a kid to enjoy, the comic that was too outrageous for Free Comic Book Day! We don’t like to brag, but this is one of the most ridiculous things you’ll see all year, with a cast that’s absolutely nuts. Filbert and his reluctant pals Hazel and Cashew find themselves the toast of the town after miraculously winning their middle school science fair competition, but the town itself is about to become toast when the swirling, yowling Meowstorm roars into the city of Turtleview. And wouldn’t you know it, only Filbert and his friends stand between salvation and certain cat scratches and allergic attacks.” It’s also written by Mike Wolfer, with art by Adrian Ropp and  Horacio Domingues. And it’s available now. [We’ll see you after Comic Con!] 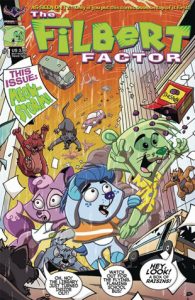