Here’s a new TV series we found out about through Animation magazine: Gigantosaurus, produced by Cyber Group Studios. “Growing up in the Cretaceous is no mean feat for kids! New volcanoes popping up all the time, long-necked brachiosauruses, meteor showers, enormous triceratopses and… the big bad Gigantosaurus, as the kids would say. Gigantosaurus isn’t actually very well-known but the mere mention of his name is enough to conjure up a range of (conflicting) emotions in our four young (dinosaur) friends: Fear (Bill), fascination (Rocky), laughter (Tiny), and scientific interest (Mazu). In short, Gigantosaurus represents four different ways of finding out more about the world when you’re between 4 and 6 years old.” According to their web site it’s all “based on a book written by the multi-awarded children novelist Jonny Duddle”. Gigantosaurus has already been sold to Disney Junior for worldwide distribution, and it’s in production now. And as you can see from their site, Cyber Group Studios have several other shows of furry fan interest in production as well. 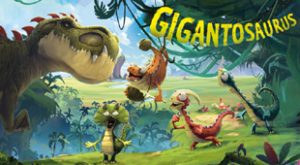