And They Can Talk To Him… and Her

Another obscure animated feature we found through Animation Magazine — this one from Latvia, of all places. Jacob, Mimmi, and the Talking Dogs is a new feature film from Atomart Studios, directed by Edmunds Jansons. It’s based on the book Dog Town by Luīze Pastore, and animated in an interesting combination of cut-out style and 2D CGI. “When Dad brings Jacob to spend summer in one of the city’s suburbs, the boy not only discovers an environment never seen before, becomes acquainted with his cousin, the smarty-boots Mimmi, and his uncle, the former seaman Eagle, but also makes friends with Boss, the leader of a horde of talking homeless dogs. Will Jacob and Mimmi succeed to make friends and together with the talking dogs rescue the place from the rich Lord Pie who has plans to convert the romantic wooden house neighbourhood into an impersonal glass skyscraper area?” The official web site has clips in the original Latvian, but there’s an English language trailer up on Vimeo too [original trailer, now archived]. 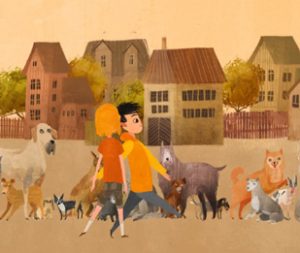