At San Diego Comic Con we came across the works of Shelley Daniels Lekven and her new book Lily Pond. Here’s what her web site says about it: “Elaborate illustrations and fabulous frogs fill this charming picture book about a little frog’s daydreams and hopes for her future. The scenes were created from colored modeling clay by Shelley Daniels Lekven, a character sculptor on The Nightmare Before Christmas and Toy Story and sculpting supervisor on James & the Giant Peach.” And speaking of (two of!) those movies, here’s what director Henry Selick had to say: “On the eve of her eighth birthday, a young frog dreams of her future in Shelley Daniels Lekven’s new book, Lily Pond. Ms. Lekven’s remarkable illustrations – all sculpted by her hand in colored clay – are eye-opening works of wonder and imagination that should make this sweet tale a children’s book classic.” After a successful Kickstarter, Lily Pond is available from Claytown Press. The web site has a video about how the book was made, too. 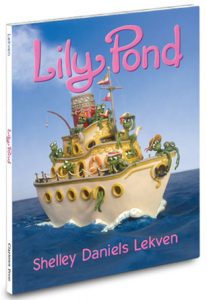