Sometimes we just let the publishers provide our tag line! Megabat is a new hardcover book for young readers by Anna Humphrey (illustrated by Kass Reich and published by Tundra Books). “Daniel Misumi has just moved to a new house. It’s big and old and far away from his friends and his life before. AND it’s haunted . . . or is it? Megabat was just napping on a papaya one day when he was stuffed in a box and shipped halfway across the world. Now he’s living in an old house far from home, feeling sorry for himself and accidentally scaring the people who live there. Daniel realizes it’s not a ghost in his new house. It’s a bat. And he can talk. And he’s actually kind of cute. Megabat realizes that not every human wants to whack him with a broom. This one shares his smooshfruit. Add some buttermelon, juice boxes, a light-saber and a common enemy and you’ve got a new friendship in the making!” Again, find out more over at PRH. 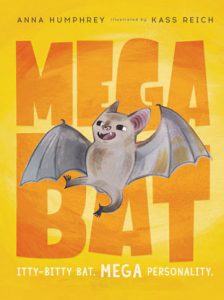