Alexander Henderson is head of a team of animators and film-makers with experience working for Disney, Netflix, and Amazon. Their first completed short film is called Breathing Space, which you can find on YouTube — and which just happens to have some anthropomorphic interest in it too! Now they’ve created a Kickstarter campaign to help finance their new film concept. “The Rhino and the Oxpecker is an action-adventure cartoon, featuring the story of Niles, a blind mercenary rhinoceros, and Redford, his neurotic-but-trusty guide bird. With Red acting as the eyes, ears, and brains of the duo, and Niles handling the action, the two work together to survive predators, poachers, and anything else the jungle can throw at them. That is, provided they can survive each other.” They’re trying to reach their current goal before Halloween, so hurry! 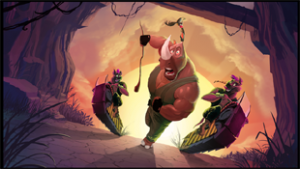