Last year we mentioned 44 Cats, an animated TV series from Rainbow Studio in Italy. Well now according to Animation Magazine (in their preview of the upcoming Brand Licensing Europe convention) it may just have found its way into North American markets. “44 Cats, produced in collaboration with Antoniano Bologna and Rai Ragazzi, follows the daily adventures of Lampo, Milady, Pilou, and Meatball – four adorable kittens who are part of a music band named The Buffycats. From their home in the Clubhouse (Granny Pina’s garage), they set out on to creative solve problems and help others while highlighting tolerance, diversity and acceptance. The show will debut on Rai Yoyo in November, whilst other broadcasting deals have been signed with Nickelodeon (multi-territorial), Discovery Kids (Latin America) and Super RTL (Germany). Major broadcasting deals in France, Russia, UK and many other countries are also in the pipeline.” Here’s hoping. Oh, the article also features a look at Mofy, a new stop-motion animated series from Sony Creative Products. “The story centers on Mofy, a fluffy, lovable rabbit who each episode learns about the world around her, discovers and understands feelings and emotions, and learns to be kinder and braver.” The show is already a hit with the preschool set in Japan. 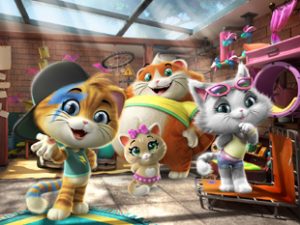