No It Won’t Put You To Sleep

And then, there were those two guys wandering around Long Beach Comic Con in sheep costumes… Turns out they were busy plugging a new card game called Sheeple, which was developed by Aaron Smith. According to the web site, Aaron ” … needed a way to tweak his game, and found inspiration from the book he was reading at the time, Animal Farm, by George Orwell.  While Animal Farm is a sad, dystopian book about an animal-led Communist revolution gone wrong, the idea of animals walking on two feet inspired him.  ‘Sheeple’ is normally a non-favorable term for people who act like sheep; who are docile, compliant, or easily influenced, and do not think for themselves.  However, spun the other way, ‘Sheeple’ could also mean sheep who are trying to become more civilized and people-like, a positive.  It would be a great way to theme a game about thinking like others.  Some sheep puns could even be thrown in there for good measure.” Having finished a successful Kickstarter campaign, chances are this will all make more sense when the game comes out in mid-September. Baa! 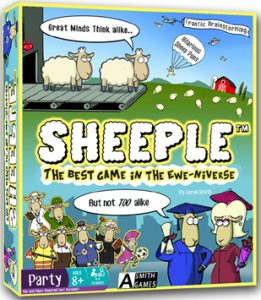