Even more recent news from Animation World Network: Now we hear about a new musical animated TV series for preschoolers called Do, Re & Mi, currently starting production. “Created by Jackie Tohn (Glow, A Futile and Stupid Gesture, American Idol) and Michael Scharf (Moon and The Son: An Imagined Conversation), every episode of Do, Re & Mi starts with an adventure and ends in a song, featuring original tracks performed by Kristen Bell (Princess Anna in Disney’s Frozen), Tohn, and other surprise guests… Do, Re & Mi is about three birdy best friends named Do, Re & Mi who live in a world filled with rhythm, beats and melodies. Along with their day-to-day adventures, the characters model ways for parents and young kids to talk about music and connect these ideas to their social-emotional development.” [ Fun fact: Ms. Bell actually had one line in Zootopia, as Priscilla the sloth. ] No word yet on a planned release date. 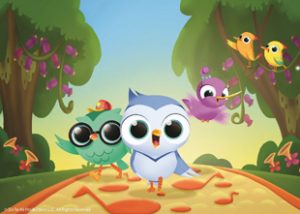