Looks like this is the season when folks-in-charge are shopping around for new TV series to sell around the world. Now from Animation Magazine we learn that Jetpack Distribution have picked up the world-wide rights to a 2D series from Britain called Pip Ahoy! It goes like this: “The series is a warm and boisterous show that centers on Pip and his friends as they carry out rescue missions, solve problems and take care of their community. It features the inimitable voice of Sir David Jason, who plays Skipper, an old seadog and Pip’s Uncle… Pip’s fans can also interact with the property offscreen in the UK thanks to recent renewals of both the master toy and apparel licenses and, in association with PJSL, character meet and greets at popular family entertainment parks across the country this summer. CHF Pip! Plc and PJSL are now in talks with two parks for a long-term, on-site Pip Ahoy! live show.” Good news for cartoon fans in the UK all right. Meanwhile for the rest of us, here’s some episodes on YouTube. 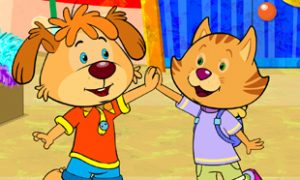