The Bird Pays Him Back

The King of Birds is a new hardcover graphic novel, written and illustrated in full color by Alexander Utkin. It’s published by Nobrow Press: “The King of Birds has victoriously defeated the King of Animals, but he is left gravely injured. He promises a merchant a great reward if he can nurse him back to health. Upon his recovery, they travel far across the land to the domains of the King’s three sisters to claim the merchant’s prize… but can his sisters overcome their greed and give up that which is most precious to them?” This is the first story in the new Gamayun Tales series of Russian folk tales — hosted by the titular Gamayun, a human-faced bird who tells stories. Check out the review over at Broken Frontier. The book is available now. 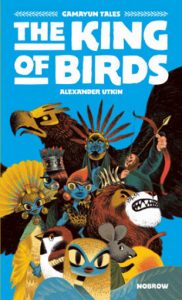