Don’t Let The General Get You!

Lo and behold, it looks as if one of the original anthropomorphic role-playing games is digging into making a come-back. Frog God Games have opened a new Kickstarter campaign to try and bring about the 3rd Edition of the venerable game Bunnies & Burrows. We’ll let them tell you about it: “It’s not easy being a rabbit. Dangers abound in a hostile world of forests, fields, and farms. You and your woodland companions — rabbits and friends of rabbits — are a tough band of protectors and explorers, ready to take on the challenge. This tactical role-playing game views the world from a unique angle, with different goals and approaches than any kind of traditional role-playing game. Rich and complex mechanisms allow you to cover any angle of rabbit life — including war-gaming — if you choose to expand the game beyond the basics of role-playing woodland animals in a world where nature is red in tooth and claw. Frog God Games has partnered with Dr. B. Dennis Sustare and Dr. Scott R. Robinson to return a venerable and influential piece of tabletop role-playing games to print. This tactical role-playing game weighs in at approximately 200 pages of full color adventure in the style of Redwall and Watership Down.” With just under a month to go (as of this writing), they’ve nearly reached their funding goal. 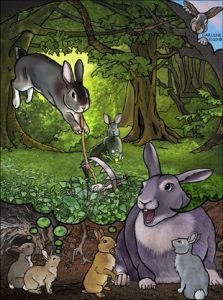